Blender vs Mixer vs Juicer vs Grinder vs Food Processor: Difference

We all know the name of these kitchen appliances. These incredible electronic inventions literally saved us our time, labor, and most importantly, these appliances have helped us to improve our cooking day by day. Thanks to the updated technology that made our life easier in every aspect. In this post, we’re going to discuss the core differences between blender vs mixer vs juicer vs grinder vs food processor.

Brilliant as it sounds, Buying All These Kitchen Appliances isn’t worth the money. If you’re smart, you can get away buying only a few of them.

You have to set the priority of what you want. Most of us still don’t know the basic differences of these appliances. So we often have a hard time to choose which one to buy.

Worry not, we will individually discuss the function of each to help you make the better choice.

The only way of comparing these kitchen appliances is to learn about their functions.

Obviously, all of these appliances don’t do the same job. You can do only a specific task using each of the appliances. 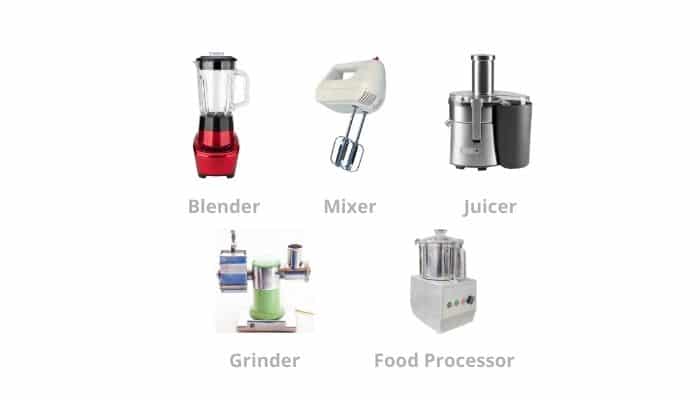 Functions Of Blender vs Mixer Kitchen Appliances and More

Now the question is, can we replace these appliances with one another

Sadly, the answer is no. You can’t ideally replace these Kitchen Appliances with one another. That’s the point of creating that many appliances.

You definitely cannot chop an onion in a juicer, can you? The even chopping or perfect dicing cannot be achieved with any kitchen appliances except a food processor.

Should we buy all these appliances? That’s a tricky question. If you have a moderate budget to spend on a kitchen, then actually you can afford to buy all these products.

But if you don’t want to spend all the money and crowd your kitchen with all these appliances, you should buy only 1 or 2 of the products.

You should choose the product that you have to use every single day. Besides, some appliances on this list are actually good enough to replace the other ones.

You will have to know more about their mechanism and uses to know about that.

Comparisons of These Five Appliances 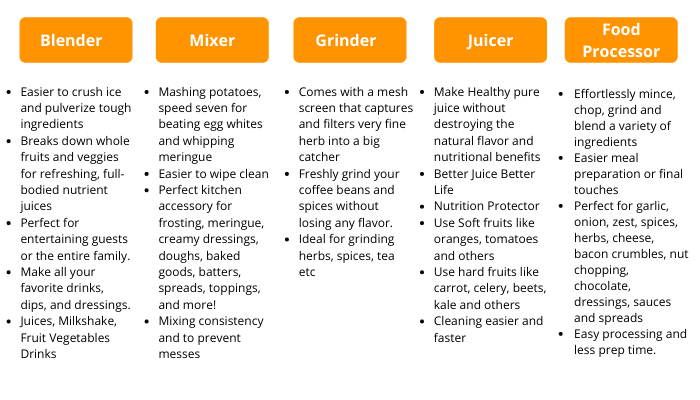 Blender vs Mixer and Juicer Vs Grinder Vs Food Processor

In this battle of the beasts, we will first discuss the ins and outs of a blender. Making milkshakes, smoothies or even cold coffees, blender is indeed another name for a refreshing sensation.

We have previously discussed the uses of blenders and its types in one of our previous posts. You will get to know how diversely we can use a blender. Making refreshing drinks to blending soups or sauces, blenders are the ultimate companion for a refreshing and hearty battle over any other appliances.

Usually, blenders come with long jars or smoothie cups. Actually, blenders are actually meant for making drinks, so using a blender jar is by far the most functional reason.

Most of the time it has a strong motor base. So that it can crush and smash even the hardest ice in your fridge. As it mostly works with liquids and stuff, most of them come with water sealing so that it doesn’t spill any of the liquid here and there.

Apart from blending, you can definitely use your blender to make fruit juice with pulp. Some products do come with a juicing attachment that separates the juice from the pulp, which is pretty much everything a juicer does.

So if you want to skip buying a juicer, try to find a blender with juicing attachment. However, a blender can not replace a food processor or a mixer.

I mean there are countless recipes of whipping eggs and making cake batter in a blender. But we all know, it doesn’t hold a candle to the outcome from a mixer. The same goes for a food processor.

Chopping an onion in a blender is useless. Because it doesn’t provide even a decent result in chopping up onion.

A mixer is actually far different from the other kitchen appliances we’re discussing. But most of us can not afford to buy a good quality mixer due to lack of budget.

A high end professional grade mixer can cost you as high as 500-600 dollars. So many of you asked if we can replace a mixer with other kitchen appliances.

Actually, all the mixers are not that expensive. If you cannot afford a stand mixer, you can always buy hand beaters. They work just fine just like a stand mixer, only a stand mixer works faster and more efficiently.

Besides, you cannot make dough with hand beaters which is another important feature of a stand mixer. A decent quality hand mixer will cost you only 20-50 dollars, so it’s not tough to get one even if you can’t afford a stand mixer.

Obviously, the outcome won’t be the same. A whip attachment of mixer adds up air to the batter or whatever you’re mixing, making the food lighter and fluffier.

On the other hand, a blender doesn’t do that. But you can still use a blender to mix eggs or make some crème caramel better.

Just like a blender, the food processor still can not replace a mixer because of not so superior outcome on making whipped food or kneading dough.

As you know, juicer extracts the juice from any fruit and leave and discard the pulp. All the healthy eaters out there who cannot start their day without a glass of juice, should get one.

Because only a juicer will serve the best juice on your breakfast. We have previously mentioned juicer attachments with some blender models. That kind of works, but doesn’t give such superior result like a juicer.

On the other hand, you surely can’t make fruit juice by using a food processor let alone a mixer!

Juicer is quite a fancy appliance for even the smartest kitchen set up. But if you like the naturally squeezed juice every day, you can surely consider getting a juicer at your kitchen.

On the contrary, if you do not make freshly squeezed juice that much often and prefer store bought fruit juice, then buying a juicer will not be worth your money.

We have already said everything depends on what you prefer. If you are okay with store bought juice or blender juice, then you can skip the juicer to buy a better quality blender instead.

A grinder is essentially used for three functions. The first one is obviously for grinding coffee beans. Although coffee grinders are sold for dedicated coffee grinding, you can do that with a good quality grinder also!

Other than grinding coffee, a grinder can be used for grinding meat and grinding hard spices like cinnamon or even crushing pepper.

A grinder is the closest match with a food processor or blender. But the basic difference is, a grinder is comparatively small in size, yet has a more powerful motor than blender or food processor.

Without a grinder, you can’t grind hard spices or coffee beans. But you can chop up meats real nice with a food processor.

A grinder is not that expensive, you can find some great quality all purpose grinders online at a cheap price. Besides, it takes only a little space in your kitchen.

So you can actually consider buying a grinder instead of skipping it choosing food processor doing all the work. Remember, neither a blender nor a food processor can crush the hard spices.

So if you are a fan of freshly ground spices, you can definitely think of having a grinder in your kitchen.

Is Food Processor Worth The Money?

Before digging into the topic, let me answer the question. Yes, a food processor is definitely worth the money. A food processor is one of the most influential appliances in the kitchen that can perform like an all rounder.

Chopping, shredding, mincing, grinding, blending your food is only one appliance away.

In our previous post on food processor, we have discussed how a food processor has changed the concept of cooking in every kitchen. Cooking was never been so much easier before inventing the food processor.

If we were to suggest only one small appliance to get for your kitchen, we would suggest having a food processor.

As per our topic of discussion, the question is can we replace a food processor with any other appliance?

Definitely, no other kitchen appliance can ever replace the function and versatility a food processor provides. You can even replace blender with a good quality food processor, but chopping vegetables with a blender? Well, that’s impossible.

Although a food processor isn’t enough to replace all the items discussed in our post as we previously said.

To wrap it up, I think all these five appliances are not easily replaceable by one another. We wouldn’t say to buy all the appliances at once, but you can consider some combination of these appliances.

There are some appliances that work simultaneously a blender vs mixer, grinder, and food processor.

You can search for them online and get your desired combined appliance putting end to the battle of all the royal kitchen appliances. Happy cooking!

How to make Garlic Chicken Pizza

As almost everyone knows, pizza is a popular and well-known dish. It is a food 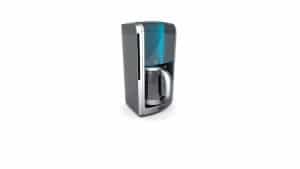 Having a patio at your home is like a party all year round. But you

Electric Kettle has brought a relief to our everyday kitchen. It has eradicated the hassle